A software system may be tested at different levels. Typical test levels are, from the base of the pyramid to the top, unit, integration, system, and acceptance. The test pyramid emphasizes having a large number of tests at the lower levels (bottom of the pyramid) and, as development moves to the upper levels, the number of tests decreases (top of the pyramid). Usually unit and integration level tests are automated and are created using API-based tools. At the system and acceptance levels, the automated tests are created using GUI-based tools. The test pyramid concept is based on the testing principle of early QA and testing (i.e., eliminating defects as early as possible in the lifecycle). 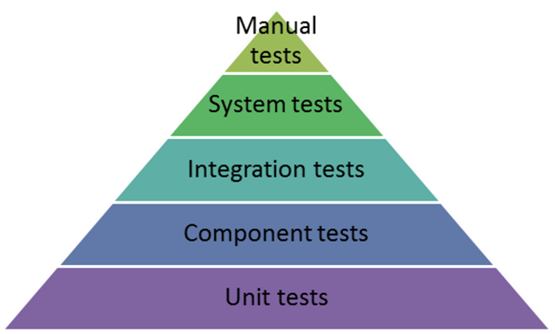 Test levels are test activities that are logically related, often by the maturity or completeness of the item under test.

In sequential lifecycle models, the test levels are often defined such that the exit criteria of one level are part of the entry criteria for the next level. In some iterative models, this rule does not apply. Test levels overlap. Requirement specification, design specification, and development activities may overlap with test levels.

In some Agile lifecycles, overlap occurs because changes to requirements, design, and code can happen at any point in an iteration. While Scrum, in theory, does not allow changes to the user stories after iteration planning, in practice such changes sometimes occur. During an iteration, any given user story will typically progress sequentially through the following test activities:

o    Feature verification testing, which is often automated, may be done by developers or testers, and involves testing against the user story’s acceptance criteria

o   Feature validation testing, which is usually manual and can involve developers, testers, and business stakeholders working collaboratively to determine whether the feature is fit for use, to improve visibility of the progress made, and to receive real feedback from the business stakeholders

In addition, there is often a parallel process of regression testing occurring throughout the iteration. This involves re-running the automated unit tests and feature verification tests from the current iteration and previous iterations, usually via a continuous integration framework.

In some Agile projects, there may be a system test level, which starts once the first user story is ready for such testing. This can involve executing functional tests, as well as non-functional tests for performance, reliability, usability, and other relevant test types.