It is a collaborative effort between various groups involved in delivering Agile Software Development. 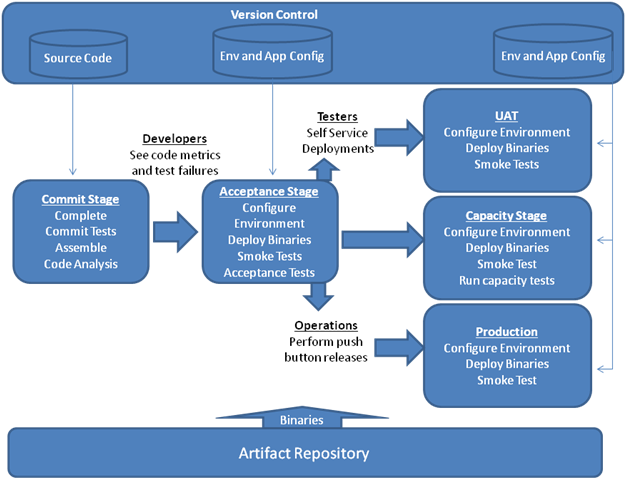 Often the first state in Deployment pipeline is compiling the code and converting into binaries. After that, we run the automated tests. Depending on the scenario, there are stages like performance testing, security check, usability testing etc in a Deployment pipeline.

In DevOps our aim is to automate all the stages of Deployment pipeline with a smooth running Deployment Pipeline, we can achieve the goal of Continuous Delivery.

At an abstract level, a deployment pipeline is an automated manifestation of your process for getting software from version control into the hands of your users. Every change to your software goes through a complex process on its way to being released. That process involves building the software, followed by its process of these builds through multiple stages of testing and deployment.

Steps in the Deployment Pipeline include

The above figure shows a typical deployment pipeline and captures the essence of the approach.

A new instance of your deployment pipeline is created upon every check-in and, if the first stage passes, results in the creation of a release candidate. The aim of the first stage in the pipeline is to eliminate builds that are unfit for production and signal the team that the application is broken as quickly as possible. We want to expend a minimum of time and effort on a version of the application that is obviously broken. So, when a developer commits a change to the version control system, we want to evaluate the latest version of the application quickly. The developer who checked in then waits for the results before moving on to the next task. There are a few things we want to do as part of the commit stage

If you only implement a commit stage in your development process, it usually represents an enormous step forward in the reliability and quality of the outputs of your teams. However, there are several more stages necessary to complete what we consider to be a minimal deployment pipeline.

A comprehensive commit test suite is an excellent litmus test for many classes of errors, but there is much that it won’t catch. Unit tests, which comprise the vast majority of the commit tests are so coupled to the low level API that it is often hard for the developers to avoid the trap that the solution works in a particular way rather than asserting that it solves a particular problem.

Commit tests that run against every check-in provides us with timely feedback on problems with the latest builds and on bugs in our application. But, without running acceptance tests in a production-like environments, we know nothing about whether the application meets the customer specifications, nor  whether it can be deployed and survive in the real world. If we want timely feedback on these topics we must extend the range of our continuous integration process to test and rehearse these aspects of our system too.

The automated acceptance test gate is the second significant milestone in the lifecycle of a release candidate.

The acceptance test stage is a significant milestone in the lifecycle of a release candidate. Once this stage has been completed, a successful release candidate has moved on from something that is largely the domain of the development team to something of wider interest and use.

For the simplest deployment pipelines, a build that has passed acceptance testing is ready for release to users, at least as far as the automated testing of the system is concerned. If the candidate fails this stage, it by definition is not fit to be released.

The progression of the release candidate to this point has been automatic with successful candidates being automatically promoted to the next stage. If you are delivering software incrementally it is possible to have an automated deployment to production. But for many systems, some form of manual testing is desirable before release, even when you have a comprehensive set of automated tests. Many projects have environments for testing integration with other systems, environments for testing capacity, exploratory testing environments and staging/production-like environments. Each of these environments can be more or less production-like and have their own unique configuration.

There is a business risk associated with every release of a production system. At best, if there is a serious problem at the point of release, it may delay the introduction of valuable new capabilities. At worst, if there is no sensible back-out plan in place, it may leave the business without mission-critical resources because they had to be decommissioned as part of the release of the new system. The mitigation of these problems is very simple when we view the release step as a natural outcome of our deployment pipeline. Fundamentally we want to

Whether you are staring a new project from scratch or trying to create an automated pipeline for an existing system, you should generally take an incremental approach to implementing a deployment pipeline. In general the steps look like this

One of the core principles of environment management is that changes to testing and production environments should only be made through an automated process. That means that you should not log into such systems remotely or perform deployments. They should always be entirely scripted.

Create a Script for Each Stage in your Deployment Pipeline

Taking this approach ensures that our scripts have a well-defined structure that helps us to keep them clean during maintenance and minimizes dependencies between components of our build and deployment system. Luckily, the deployment pipeline provides an excellent organizing principle for dividing up responsibilities between build scripts. When you first start your project, it makes sense to have a single script containing every operation that will be performed in the course of executing the deployment pipeline, with dummy targets for steps that are not yet automated. However, once your script gets sufficiently long, you can divide it up into separate scripts for each stage in your pipeline. Thus you will have a commit script containing all the targets required to compile your application, package it, run the commit test suite, and perform static analysis of the code. You then need a functional acceptance test script that calls your deployment tool to deploy the application to the appropriate environment, then prepare any data, and finally runs the acceptance tests.

Use an Appropriate Technology to Deploy Your Application

In a typical deployment pipeline, most stages that follow a successful commit stage, such as the automated acceptance test stage and user acceptance test stage, depend upon the application being deployed to a production-like environment. It is vital that this deployment is automated too. However, you should use the right tool for the job when automating deployment, not a general-purpose scripting language (unless the deployment process is extremely simple).

Use the Same Scripts to Deploy to Every Environment

It is essential to use the same process to deploy to every environment in which your application runs to ensure that the build and deployment process is tested effectively. That means using the same scripts to deploy to each environment and representing the differences between environments—such as service URIs and IP addresses—as configuration information to be managed separately. Separate out configuration information from the script and store it in version control, providing some mechanism for your deployment script to retrieve it. It is essential that both build and deployment scripts work on developers’ machines as well as on production-like environments, and that they are used to perform all build and deployment activities by developers.

Ensure the Deployment Process Is Idempotent

Your deployment process should always leave the target environment in the same (correct) state, regardless of the state it finds it in when starting a deployment. The simplest way to achieve this is to start with a known-good baseline environment, provisioned either automatically or through virtualization. This environment should include all the appropriate middleware and anything else your application requires to work. Your deployment process can then fetch the version of the application you specify and deploy it to this environment, using the appropriate deployment tools for your middleware.