In its most basic form, a Sprint Backlog is represented as a task board and can be drawn on a whiteboard or even a section of wall. Using electrical tape or a dry erase pen, the board is divided into three columns labeled “To Do”, “In Progress” and “Done”. Sticky notes or index cards, one for each task the team is working on, are placed in the columns reflecting the current status of the tasks. 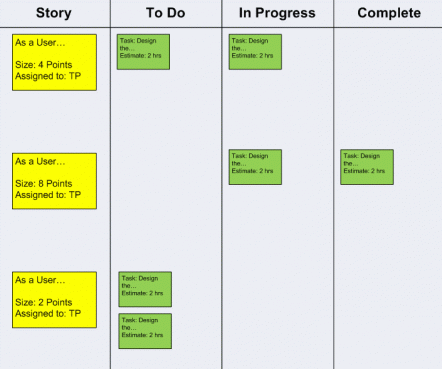 The task board is updated frequently, most commonly during the daily meeting, based on the team’s progress since the last update. The board is commonly “reset” at the beginning of each Sprint to reflect the Sprint Plan.

Some of the variations of the task boards are depicted below

For myths around Sprint Backlog, refer to following articles