DevOps Perspective of Infrastructure and Environments

There are three steps to deploying software

Creating and managing the infrastructure

It is a known fact that most projects fail due to people problems rather than technical problems. Almost all medium and large companies separate the activities of development and infrastructure management (or Operations) into two groups or silos. It is often the case that these two group of stakeholders have an uneasy relationship. This is because development teams are incentivized to deliver changes as rapidly as possible whereas operations teams aim for stability.

Probably the most important thing to keep in mind is that all stakeholders have a common goal : making the release of valueable software a low-risk activity. We have discussed this earlier that best way to do this is to keep releasing small increments of software through creation of Continuous Delivery pipeline. This ensures that there is as little changes as possible between releases. Given this context, here are some of the most important high-level concerns of operations teams. 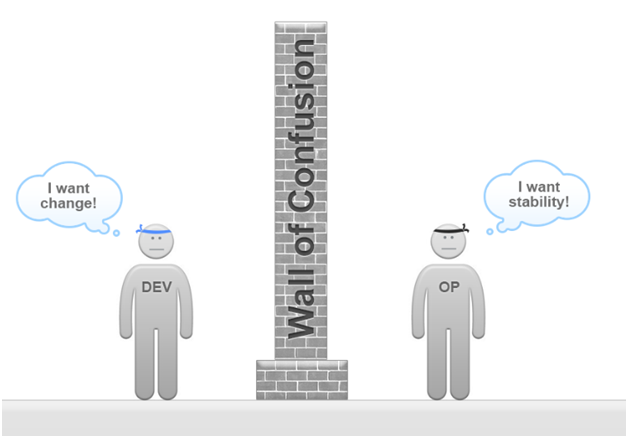 There are many different classes of configuration information at play in any environment, all of which should be provisioned and managed in an automated fashion.

Even if you do not have control over the selection of your infrastructure, If you intend to fully automate your build, integration, testing and deployment, you must address the following questions.

As with every other aspects of your delivery process, you should keep everything you need to create and maintain your infrastructure under version control. At least, that means,

o   Defining an automated process for making changes to your infrastructure

o   Every change whether its updating firewall or deploying a new version of yours service, should go through the same change management process

Provisioning servers and managing their configuration is often overlooked in small and even medium-sized organizations.

Data and its management and organization pose a particular set of problems for testing and deployment processes for two reasons.

In most cases, when we deploy new code, we can erase the previous version and wholly replace it with a new copy. In this way we can be certain of our starting position. While that option is possible for data in a few limited cases, for most real-world systems this approach is impossible. Once a system has been released into production, the data associated with it will grow, and it will have significant value in its own right. Indeed, arguably it is the most valuable part of your system. This presents problems when we need to modify either the structure or the content. As systems grow and evolve, it is inevitable that such modifications will be required, so we must put mechanisms into place that allow changes to be accomplished while minimizing disruption and maximizing the reliability of the application and of the deployment process. The key to this is automating the database migration process. A number of tools now exist that make automating of data migration relatively straightforward, so that it can be scripted as part of your automated deployment process. These tools also allow you to version your database and migrate it from any version to any other. This has the positive effect of decoupling the development process from the deployment process—you can create a migration for each database change required, even if you don’t deploy every schema change independently. It also means that your database administrators (DBAs) don’t need a big up-front plan—they can work incrementally as the application evolves.

As with any other change to your system, any changes to any databases used as part of your build, deploy, test, and release process should be managed through automated processes. That means that database initialization and all migrations need to be captured as scripts and checked into version control. It should be possible to use these scripts to manage every database used in your delivery process, whether it is to create a new local database for a developer working on the code, to upgrade a systems integration testing (SIT) environment for testers, or to migrate production databases as part of the release process. Of course, the schema of your database will evolve along with your application. This presents a problem because it is important that the database has the correct schema to work with a particular version of your application. For example, when deploying to staging, it is essential to be able to migrate the staging database to the correct schema to work with the version of the application being deployed. Careful management of your scripts makes this possible. Finally, your database scripts should also be used as part of your continuous integration process. While unit tests should not, by definition, require a database in order to run, any kind of meaningful acceptance tests running against a database-using application will require the database to be correctly initialized. Thus, part of your acceptance test setup process should be creating a database with the correct schema to work with the latest version of the application and loading it with any test data necessary to run the acceptance tests. A similar procedure can be used for later stages in the deployment pipeline.

An extremely important aspect of our approach to delivery is the ability to reproduce an environment, along with the application running in it, in an automated fashion. Without this ability, we can’t be certain that the system will behave in the way we expect. This aspect of database deployment is the simplest to get right and to maintain as your application changes through the development process. Almost every data management system supports the ability to initialize a data store, including schemas and user credentials, from automated scripts. So, creating and maintaining a database initialization script is a simple starting point. Your script should first create the structure of the database, database instances, schemas, and so on, and then populate the tables in the database with any reference data required for your application to start.

The simplest process for deploying a database afresh is as follows

Continuous integration demands that we are able to keep the application working after every change made to it. This includes changes to the structure or content of our data. Continuous delivery demands that we must be able to deploy any successful release candidate of our application, including the changes to the database, into production (the same is also true for user-installed software that contains a database). For all but the simplest of systems, that means having to update an operational database while retaining the valuable data that is held in it. Finally, due to the constraint that the data in the database must be retained during a deployment, we need to have a rollback strategy should a deployment go wrong for some reason.

Once you have roll-forward and roll-back scripts for each version of your application, it is relatively easy to use an application at deploy time to migrate your existing database to the correct version required by the version of the application you are deploying.

Rolling Back without Losing Data

In the case of a rollback, your roll-back scripts (as described in the previous section) can usually be designed to preserve any transactions that occur after the upgrade took place.

Another strategy is to decouple the database migration process from the application deployment process and perform them independently.

Configuration management is all about trying to ensure that the files and software you are expecting to be on a machine are present, configured correctly, and working as intended.

When you have only a single machine this is fairly simple. When you have five or ten servers, it is still possible to do this manually, but it may take all day. However, when your infrastructure scales up into the thousands we need a better way of doing things.

What is “version control”, and why should you care? Version control is a system that records changes to a file or set of files over time so that you can recall specific versions later. For the examples in this book you will use software source code as the files being version controlled, though in reality you can do this with nearly any type of file on a computer.

If you are a graphic or web designer and want to keep every version of an image or layout (which you would most certainly want to), a Version Control System (VCS) is a very wise thing to use. It allows you to revert files back to a previous state, revert the entire project back to a previous state, compare changes over time, see who last modified something that might be causing a problem, who introduced an issue and when, and more. Using a VCS also generally means that if you screw things up or lose files, you can easily recover. In addition, you get all this for very little overhead.

o   Another one is to declare them and use a tool like Maven or Ivy to download libraries from Internet repositories to your own artifact repository.

Each configuration setting can be modeled as a tuple (A data structure consisting of multiple parts – typically an ordered set of values). Generally the set of the tuples available and their values typically depend on three things

Some of the principles of managing configuration are as follows